September 18th, 2018 marked the 45th anniversary of the admission of the two Germanys to the United Nations Organization. Twenty-eight years after the end of the Second World War, that had brought together the “United Nations” in their fight against the German Third Reich, the German Democratic Republic (GDR) and the Federal Republic of Germany (FRG) were admitted by acclamation as member States numbers 133 and 134, respectively. 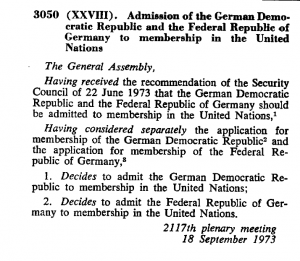 “Much as my delegation welcomes universality of membership of this Organization, we protest, in the name of self-determination, the fact that the German people […] should have been partitioned. Do the German people, whether living in what is called the German Democratic Republic or in the Federal Republic of Germany, differ from one another? They were divided on ideological grounds, not on ethnological grounds. […].

But let me say that, much as my Government welcomes the admission of the so-called two Germanys, we still believe it was wrong to divide the German people on ideological grounds. By the principle of self-determination, they should have decided as one people what they would be.”

Although seated next to each other, the two German States were worlds apart. The GDR, “the first socialist State of workers and peasants on German soil” and a member of the Soviet dominated Warsaw Pact alliance, became a member of the Eastern European States Group; the FRG, on the other hand, was part of NATO and the European Communities and became a member of the Western European and Others Group. It was to take another 17 years and the end of the Cold War before the GDR on 3 October 1990 acceded to the FRG to make the Federal Republic of Germany or, in short, Germany the only German member State of the United Nations.

On 18 September 2018, the Federal Minister for Foreign Affairs tweeted:

“45 years ago Germany became a member of the United Nations. The return to the international community remains for us a sign of confidence and an ongoing commitment. In the UN Security Council 2019/20, we will continue to speak up for cooperation, peaceful conflict resolution and the application of international law.”