Educational institutions are increasingly becoming part of the battlefield, especially in non-international armed conflicts. Kindergartens, schools and universities are used for military purposes. Military forces are deployed in and nearby schools, and schools are used a weapons depots or firing positions, thereby making them legitimate military objectives under international law. Armed conflict regularly leads to damage and destruction of educational infrastructure, threatens the lives of students and teachers, and may deprive whole generations of their right to education.

The protection of educational institutions during armed conflict under international law is rudimentary at best. Schools are generally considered to be civilian objects which may not be made the object of attack or of reprisals unless they are being used to make an effective contribution to military action. Where doubt may arise as to whether a school is being used to make an effective contribution to military action, it is presumed not to be the case. Institutions of education, even when State property, shall be treated as private property and their seizure, destruction or wilful damage is forbidden and should be made the subject of legal proceedings. Occupying powers shall, with the proper cooperation of the national and local authorities, facilitate the proper working of educational institutions in occupied territories. Intentionally directing attacks against educational institutions which are not being used to make an effective contribution to military action constitutes a war crime both in international and non-international armed conflicts. The United Nations Security Council has condemned attacks on schools, expressed deep concern at the military use of schools and urged all parties to armed conflicts to respect their civilian character and to consider concrete measures to deter the use of schools by armed forces and armed non-State groups in contravention of applicable international law.

International law neither prohibits nor regulates the use of educational institutions for military purposes. On the contrary, it provides that such institutions may be legitimate military objectives if, by their location or use, they make an effective contribution to military action. In order to provide better protection to schools and universities from military use and to minimize the negative impact of armed conflict on education, Argentina and Norway headed a consultation process which led to the adoption of the “Safe Schools Declaration” at an international conference on safe schools held in Oslo on 29 May 2015. The Declaration provides States the opportunity to express broad political support for the protection and continuation of education in armed conflict, and to endorse and commit to implement the “Guidelines for Protecting Schools and Universities from Military Use during Armed Conflict” (the “Lucens Guidelines”). 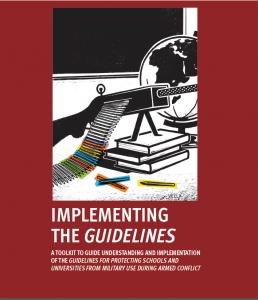 The six Guidelines drawn up in 2014 provide that

“I am delighted that Germany has endorsed the Safe Schools Declaration. By doing so, Germany is underscoring that particularly strict yardsticks are to be put in place during armed conflict to protect schools and other educational establishments. More protection for schools means more protection for children.

Unfortunately we have to admit that the intensity and duration of armed conflicts are increasing. It is estimated that one in six children currently lives in the direct vicinity of an armed conflict and is affected by it. The importance of education when it comes to securing peace and prosperity in the long term cannot be overestimated. If children are excluded from education due to armed conflict, this can leave long-term damage on entire generations. This means the repercussions of such conflict endure for many years. This is why Germany has long been working to protect children in armed conflict, also for example during our last term in the UN Security Council 2011/12.

Support of the Safe Schools Declaration follows on from this and underscores the commitment which we will continue in the future.”

Both the Declaration and the Guidelines are not international treaties and thus are not legally binding – they are classic “soft law” instruments. These documents are not “signed” but are “endorsed”. With their endorsement, States express their political commitment to advance the principles of the Safe Schools Declaration, including the Guidelines for Protecting Schools and Universities from Military Use during Armed Conflict. States can announce their endorsement either by making a public statement and/or sending an endorsement letter to the Norwegian Ministry of Foreign Affairs. The press release of the Federal Foreign Office which referred to Germany “signing” the Safe Schools Declaration was thus misleading and might create the impression of Germany having entered a legally binding commitment. However, even political commitments should yield some practical consequences and it remains to be seen whether these commitments will be reflected in a future revision of the German Army’s Manual on International Humanitarian Law in Armed Conflict which is, so far, silent on these issues.