In December 2016, Berlin state police seized a number of artefacts from a Vietnamese businessman who was investigated for a violation of section 40, paragraph 1, of the German Act on the Protection of Cultural Property. The provision prohibits the placing on the market of cultural property that has been lost, unlawfully excavated or unlawfully imported. Anyone who engages in such an act is liable to pay a fine or for imprisonment up to five years. The artefacts consisted of 10 stone tools and eight bronze labour and hunting tools dating back to between the seventh and second centuries BC. Archaeologists from Berlin museums found that the objects might belong to tombs located in the territory of present-day Vietnam dating from the third century BC. 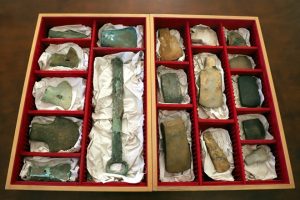 The Vietnamese businessman could prove neither origin nor ownership of the artefacts and agreed to have them handed over to any person entitled to receive them. The Federal Foreign Office sent a verbal note to the Vietnamese Embassy in Berlin informing it of the seizure of the artefacts. The Federal Foreign Office pointed out that in accordance with the Act on the Protection of Cultural Property, a request for return of the objects under the 1970 UNESCO Convention on the Means of Prohibiting and Preventing the Illicit Import, Export and Transfer of Ownership of Cultural Property (1970 UNESCO Convention) could only be made if the artefacts had been removed from the sovereign territory of Vietnam in violation of its legislation after 26 April 2007. The Federal Foreign Office requested to be notified whether Vietnam asserted any entitlement to the artefacts and, if so, on what legal basis.

In its response, the Vietnamese Embassy set out the various laws on the protection of cultural property in Vietnam. It concluded that, on the basis of these laws, the archaeological objects in question were the property of the State of Vietnam and that the objects had been illegally removed from Vietnam because there was no export permit from the Vietnamese authorities. Vietnam could not specify the date of the illegal removal as the objects presumably derived from clandestine unlawful excavations. However, this was immaterial as Vietnam was able to establish ownership of the artefacts and the Vietnamese businessman had agreed to voluntarily return them to the rightful owner.

On 29 March 2018, the Berlin state police handed over the artefacts to the Vietnamese Embassy. Upon receiving the objects the Vietnamese Ambassador to Germany thanked the Berlin authorities and the German Federal Foreign Office and commended Germany for being a State party who was seriously implementing the 1970 UNESCO Convention.

Both Vietnam and Germany are parties to the 1970 UNESCO Convention. Germany, which initially considered parts of the treaty to be incompatible with its legal and economic order, only ratified the Convention on 30 November 2007 and, in accordance with Article 21, the Convention became binding on Germany on 29 February 2008. Article 7(b)(ii) of the Convention obliges States Parties to take appropriate steps to recover and return illegally exported cultural property at the request of the State party of origin. However, the obligation applies only to “cultural property stolen from a museum or a religious or secular public monument or similar institution” and only if “such property is documented as appearing in the inventory of that institution.” Objects derived from clandestine illegal excavations will usually not fall under that provision. In any case, the obligation to return cultural property is expressly limited to property “imported after the entry into force of this Convention in both States concerned.” The return of the artefacts in the present case thus was not effected under Article 7(b)(ii) of the 1970 UNESCO Convention but under Article 13(b) which obliges States Parties, consistent with their laws, “to ensure that their competent services co-operate in facilitating the earliest possible restitution of illicitly exported cultural property to its rightful owner.”