On 16 March 2018 at 09:30 (07:30 GMT) a group of about 10 masked people intruded into the German consulate in the city of Heraklion on the Greek island of Crete to stage a protest against Turkey’s military operation in Syria’s Afrin region against the Kurdish Democratic Union Party (PYD) and its military wing, the People’s Protection Units (YPG). The protesters hung a banner from the consulate balcony reading “Resistance is life” and “Solidarity with Afrin” in Kurdish, German and Greek. 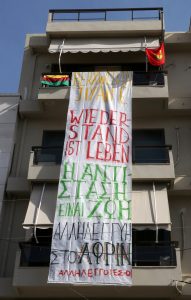 The protesters also sprayed slogans such as “Fight 4 Afrin” on the walls, smashed windows and caused significant damage to the property. The consulate which is housed in an apartment building in downtown Heraklion was not staffed at the time of the incident. No arrests were made. The Greek police began an investigation.

Neither the German embassy in Athens nor the Federal Foreign Office in Berlin publicly commented on the incident. The raid on the German consulate nevertheless raises the question of Greece’s responsibility. Both Greece and Germany are parties to the Vienna Convention on Consular Relations which provides for the protection of consular premises. Consular premises comprise both buildings and parts of buildings which are used exclusively for the purposes of the consular post. The Greek Government’s obligation to protect consular premises depends on the status of these premises. The Convention distinguishes between “consular posts headed by career consular officers” and “consular posts headed by honorary consular officers”. With regard to career consulates, Article 31, paragraph 3, of the Convention provides:

“[T]he receiving State is under a special duty to take all appropriate steps to protect the consular premises against any intrusion or damage and to prevent any disturbance of the peace of the consular post or impairment of its dignity.”

The expression “special duty” is used to emphasize that the receiving State is required to take steps going beyond those normally taken in the discharge of its general duty to maintain public order. The premises of honorary consulates, on the other hand, attract less protection. They do not enjoy inviolability, and Article 59, paragraph 2, of the Convention provides:

“The receiving State shall take such steps as may be necessary to protect the consular premises of a consular post headed by an honorary consular officer against any intrusion or damage and to prevent any disturbance of the peace of the consular post or impairment of its dignity.”

The consulate in Heraklion was an honorary consulate, and as such Greece was not required to take steps going beyond those normally taken in the discharge of its general duty to maintain public order. In particular, Greece was not required to station police permanently outside the consulate. If there was no indication of a particular risk or threat to the consulate premises, Greece will not be in violation of its obligations under the Vienna Convention on Consular Relations. Germany thus will not be entitled to any payment of compensation for the damage done to its consulate.