As of 13 February 2018, Germany was ranked second on the Henley Passport Index, behind current joint leaders Japan and Singapore. For the past five years running, Germany had been ranked first. The Henley Passport Index ranks the world’s regular passports by the number of countries to which holders can travel visa-free, based on data provided by the International Air Transport Association (IATA). Holders of a German passport currently enjoy visa-free access to 179 countries, up from 177 countries in January 2018 and 176 countries in 2017. 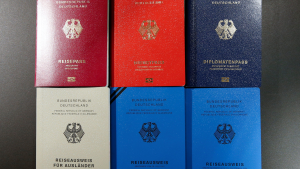 A visa is a document, or an endorsement stamped into a passport by a consul or other official, certifying that the passport was examined and found to be in order, to entitle the bearer to passage into, or continued residence in, the State granting the visa. In other words, a visa, when required, constitutes prima facie evidence of entitlement to enter the issuing State, although entry may still be refused by immigration officials.

A valid visa presupposes the existence of a valid passport. In Europe, early mention of passport-like documents can be traced back to an Act of the English Parliament in 1414, in the form of safe conduct documents issued by King Henry V. Over the next centuries, the use of travel permits for various purposes became more common in Europe, with France in the 17th and 18th centuries being a notable example of a country with extensive travel regulations. At varying points during this period, France even had a general passport requirement in place for all individuals entering or leaving the country. During the period immediately following the French revolution, for example, passports included both a physical description of the applicant and a designation of the destination, indicating its function as a “one-off” travel permit. Due to increased travel among the wider population, visas were introduced during Napoleon’s reign as permissions to travel to additional destinations.

The modern passport system was established during the First World War, as the passport was now recognised internationally as a document evidencing nationality and identity for the purposes of travelling, rather than a request to allow travel. Following the First World War, the League of Nations made an effort to standardise the formal aspects of the passport, including determining a common size, layout and design.

During the 1920s rubber-stamped visas became widely used in Europe as general but not final permissions to enter a country. Such visas were regularly issued by the destination State’s consular officers abroad. According to Article 5(c) of the 1963 Vienna Convention on Consular Relations, the issuing of visas is one of the core consular functions. In recent years many States have abolished rubber-stamped visas and replaced them with more secure printed visa labels or electronic visas.

Since the Second World War, all States have removed or relaxed their visa requirements in respect of the nationals of one or more other States wither by way of bilateral or multilateral treaties or by national legislation.

The notion of visa-free travel is best understood as underpinned by a complex set of legal rules governing the processes of obtaining entry and residence to a given country, depending on the regulations in place vis-à-vis the country of nationality of the individual wishing to travel. For the practical purpose of traveling, visa-free access to a country is desirable as it does away with the need to gain permission for entry in advance, in turn incentivising tourism and commercial travel.

Although the visa system is often portrayed in binary terms – visa required or visa-free – the reality is somewhat more nuanced. Depending on the regulations in place, a traveller may require no visa at all, may be required to obtain a visa on arrival, may require a visitor’s permit, or undergo electronic registration through electronic travel authority (ETA). The Henley Passport Index considers all of these to be instances of visa-free travel, even if a visa must in reality be obtained, with the deciding factor being the lack of a requirement for pre-departure government approval of entry. Thus, a German citizen’s complete freedom of movement within the European Union is classed as visa-free just as much as the same citizen’s rather more limited ability to stay in Belarus for up to five days when entering through Minsk airport is classed as visa-free. The visa-free variable relies on the single test of pre-departure approval for entry to the detriment of other important factors, such as length of stay and consequent economic rights, which must be considered by anyone wishing to gain a complete picture of global travel regulations. However, rankings such as the Henley Index remain useful guides for travellers and provide easily accessible information in a relatively complex field.