On 7 June 1880, Sultan Abdul Hamid II presented Kaiser Wilhelm II with a property on the western shores of the Bosporus in Istanbul’s Tarabya district for use as a summer residence of the German ambassador to the Ottoman Empire. As the title deed requires Germany to use the property for diplomatic purposes, the property today falls under the authority of the German Embassy in Ankara. 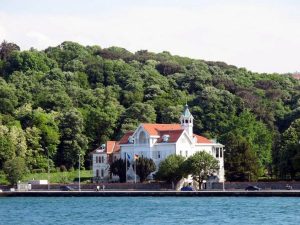 Technically speaking, the Tarabya property constitutes a branch office of the German Embassy in Ankara. As such, it belongs to the “premises” of the German diplomatic mission to Turkey. According to Article 22, paragraph 1, of the Vienna Convention on Diplomatic Relations, the “premises of the mission are inviolable. The agents of the receiving State may not enter them except with the consent of the head of the mission.”

It was the inviolability of the premises at Tarabya that led German-Turkish journalist Deniz Yücel to ask the German authorities on 25 December 2016 for refuge there. Yücel, Turkey correspondent for the German daily Die Welt since May 2015, had reported, inter alia, on links between the Turkish Minister of Energy and Natural Resources and son-in-law of President Recep Tayyip Erdogan, Berat Albayrak, and a company implicated in secret oil deals with the Kurds in northern Iraq. The report was based on the private emails of Mr. Albayrak which had been obtained illegally by a Turkish computer hacker group, RedHack, which is considered a terrorist organization in Turkey. On 4 December 2016, the Istanbul Chief Public Prosecutor’s Office launched an investigation into links between nine journalists, including Deniz Yücel, and RedHack. In the morning hours of 25 December 2016, six of the nine journalists were arrested, which led Deniz Yücel to ask for refuge on the embassy premises in Tarabya. In the following weeks, while he was wanted by police for questioning, it was stated by friends and family that he was “abroad”.

Behind the scenes German diplomats busily worked on Deniz Yücel being allowed to leave the country. The Turkish authorities, however, were aware of his whereabouts. On 2 February 2017, during Chancellor Angela Merkel’s visit to Ankara, President Erdogan reportedly told the Chancellor:

“You have been hiding this man, this terrorist, within the residence of the German Consulate General in Tarabya for a month. Give him up so that he can be tried.”

On 14 February 2017, after being holed up inside the German embassy premises for 51 days, Deniz Yücel turned himself in at Istanbul police headquarters and was taken into custody. On 27 February 2017, an Istanbul court ordered his detention pending trial for “propaganda in support of a terrorist organisation” and “inciting the public to violence”.

Amidst deteriorating relations between Turkey and Germany, President Erdogan on 3 March 2017 publicly accused Germany of having harboured Deniz Yücel. In a speech in Istanbul, he said:

“This person hid in the German embassy as a member of the PKK and a German agent for one month. When we told them to hand him over to be tried, they refused.

They first didn’t hand him over, but later, somehow, they did. The judiciary did what was necessary and arrested him.”

The longer Deniz Yücel stayed on the embassy premises at Tarabya, the more untenable the situation became for the Federal Government. If Germany was to avoid the fate of Ecuador which, at the time, had been hosting Wikileaks founder Julian Assange in its London embassy for more six years, Deniz Yücel had to be convinced to leave voluntarily.

The Federal Government was aware that by harbouring Deniz Yücel on its embassy premises it was violating international law. An unnamed Foreign Office official admitted: “In formal terms, through this action we have removed a Turkish citizen from the justice system of his country.” The Vienna Convention on Diplomatic Relations provides in Article 41, paragraph 1, that the members of diplomatic missions must respect the laws and regulations of the receiving State and that they have the duty not to interfere in the internal affairs of the receiving State. In particular, the premises of the mission must not be used in any manner incompatible with the functions of the mission as laid down in the Vienna Convention or by other rules of general international law or by any special agreements in force between the sending and the receiving State. The granting of diplomatic asylum is not one of the functions of a diplomatic mission, in particular if diplomatic asylum is aimed at shielding a person from criminal prosecution. The International Court of Justice held in the Asylum case:

“In the case of diplomatic asylum, the refugee is within the territory of the State where the offence was committed. A decision to grant diplomatic asylum involves a derogation from the sovereignty of that State. It withdraws the offender from the jurisdiction of the territorial State and constitutes an intervention in matters which are exclusively within the competence of that State. Such a derogation from territorial sovereignty cannot be recognized unless its legal basis is established in each particular case.”

There was no legal basis for the granting of diplomatic asylum in the case of Deniz Yücel. On the contrary, Germany has consistently stood by the position that there is no right to grant diplomatic asylum in international law. For example, during the regular government press conference on 15 August 2014 the spokesperson of the Federal Foreign Office declared:

“Germany takes the position both in international law and in constitutional law that there is no such thing as diplomatic asylum. We look after all people who are in need […]. But that does not mean that they would find refuge on the premises of an embassy or consulate general.”

In a report on the legal and factual aspects of the possibility of Edward Snowden testifying before the Parliamentary Committee investigating surveillance activities of the U.S. National Security Agency in Germany at the German embassy in Moscow, the Federal Government wrote in December 2013:

“The concept of ‘diplomatic asylum’ is not part of general international law. On the contrary, third-country nationals and even our own nationals who want to escape arrest by the authorities of the receiving State by taking refuge in the embassy must be turned over to the local authorities at their request. There may be an exception to this rule only if there is an immediate threat to life and limb.”

Back in 1973 the Federal Government explained why the German embassy in Santiago de Chile did not grant diplomatic asylum to persons fleeing into the embassy during the violent coup d’état in that country. On 17 October 1973, the Parliamentary Secretary of State at the Federal Foreign Office stated in reply to a parliamentary question:

“The right of diplomatic asylum which initially existed in Latin America as regional customary international law was codified by the Latin American states in the Havana Convention of 1928 and was further developed in two conventions in Montevideo 1933 and Caracas 1954.

By virtue of these conventions, only the diplomatic missions of the Latin American States parties to these conventions have the right to grant diplomatic asylum. For other states and their missions – including the Embassy of the Federal Republic of Germany – this right does not exist.

The right of Latin American embassies to grant asylum includes, in effect, the right freely to leave the country. Other non-Latin American diplomatic missions that have taken in persons, on the other hand, are obliged to turn them over to the authorities of the receiving State at their request, even if they are facing a conviction for political offenses.”

Against the background of its position on diplomatic asylum, the Federal Government would have had to turn over Deniz Yücel to Turkey if the Turkish authorities had made a formal request for his transfer, even if it had considered the criminal investigation or the prosecution against him politically motivated. By leaving voluntarily, Yücel thus saved the Federal Government from huge public embarrassment. This may have been one reason why the Federal Government worked so strenuously for his release.