On 3 February 2017, the deputy government spokesperson announced that Chancellor Angela Merkel would meet Hollywood star Richard Gere in his capacity as chair of the International Campaign for Tibet (ICT) in order “to exchange views about the current situation in Tibet.” The ICT is a non-governmental organization with more than 100,000 supporters which advocates a democratic right to self-determination, the safeguarding of human rights, and the protection of culture and environment in Tibet. Asked whether, in light of Chinese sensitivities with regard to the question of Tibet, the meeting had been discussed and agreed on in advance with the Chinese Government, the deputy spokesperson replied:

On 9 February 2017, Chancellor Merkel met Richard Gere for a 45-minute meeting at the chancellery in Berlin. The government spokesperson posted a photo of the meeting. 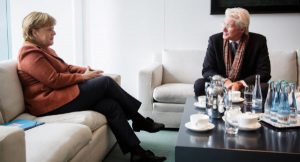 The photo was accompanied by the following text: “Chancellor Merkel in talks with Richard Gere, chairman of the International Campaign for Tibet, on the situation in the region.”

The deputy government spokesperson confirmed Germany’s adherence to the one-China policy. That adherence had been affirmed by Chancellor Merkel herself in December 2016 when she stated: “We continue to stand by the one-China policy and we will not change our position.” The one-China policy is usually employed in connection with Taiwan. It acknowledges the Chinese position that there is but one China in the world and that the Government of the People’s Republic of China is the sole legitimate government representing the whole of China, including Taiwan which is an inseparable part of the Chinese territory. The extension of the “One-China Policy” to Tibet is at least unusual, if not legally incorrect. Unlike Taiwan, Tibet is not de facto separated from China and its government-in-exile is not recognized by any State.

“In line with the entire community of States, including neighbouring India, the Federal Government is of the opinion that Tibet is an integral part of the Chinese State.

“In line with the entire community of States, including neighbouring India, the Federal Government is of the opinion that Tibet is an integral part of the Chinese State. With good reasons, Tibet can invoke traditional, historically-based autonomy rights. The Federal Government supports the Tibetan claim to autonomy, especially in the cultural and religious spheres, as an adequate expression of the right of self-determination of the Tibetan people. In line with the legal conviction of the community of States this does not mean recognition of a right of Tibet to secede from the Chinese State.

Even if, in its turbulent history, Tibet had temporarily met the conditions of independent statehood – a question international law does not have a clear answer to –  it must be recorded that even at that time Tibet was denied recognition as a State by the community of States.

The German position on the status of Tibet as an integral part of the People’s Republic of China has been consistent for many years. While the meeting with Richard Gere may have raised a few eyebrows in Beijing, it did no signify any shift in the German position on Tibet.