After a creeping military occupation and the holding of a “referendum” in the presence of Russian troops, the Russian Federation on 21 March 2014 formally annexed part of the territory of Ukraine – the Autonomous Republic of Crimea and the city of Sevastopol (Crimea). Since that day, Russia has considered the Crimean Peninsula and its territorial waters as its State territory. Germany and the majority of the international community do not recognise the incorporation of Crimea into the Russian Federation. On 27 March 2014, the UN General Assembly underscored that the referendum had no validity and could not form the basis for any alteration of the status of the Autonomous Republic of Crimea or of the city of Sevastopol. It also called upon all States and international organisations not to recognise the incorporation and to refrain from any action or dealing that might be interpreted as recognising any alteration of the status of the territory in question. The annexation of Crimea and Russia’s military support of the separatists in the Donbas region of eastern Ukraine led to an ongoing conflict between the two countries. After a period of relative calm, fighting between Ukrainian government forces and pro-Russian separatists in the Donbas region intensified and tensions between the two States heightened again at the beginning of 2021. By March, Russia had amassed some 100,000 troops on Ukraine’s border and in annexed Crimea. It also transferred additional warships from the Caspian Sea to the Black Sea and reinforced its military capabilities in the Azov-Black Sea region. On 9 April 2021, it was reported that beginning on 14-15 April the United States would deploy two warships to the Black Sea in a show of support of the Ukrainian Government.

Against this background, the Russian Federation suspended the innocent passage of foreign warships and other government ships in three sea areas of the Black Sea within 12nm from the baselines of the Crimean Peninsula. On 14 April 2021, the Department of Navigation and Oceanography of the Ministry of Defence of the Russian Federation issued the following Notice to Mariners: 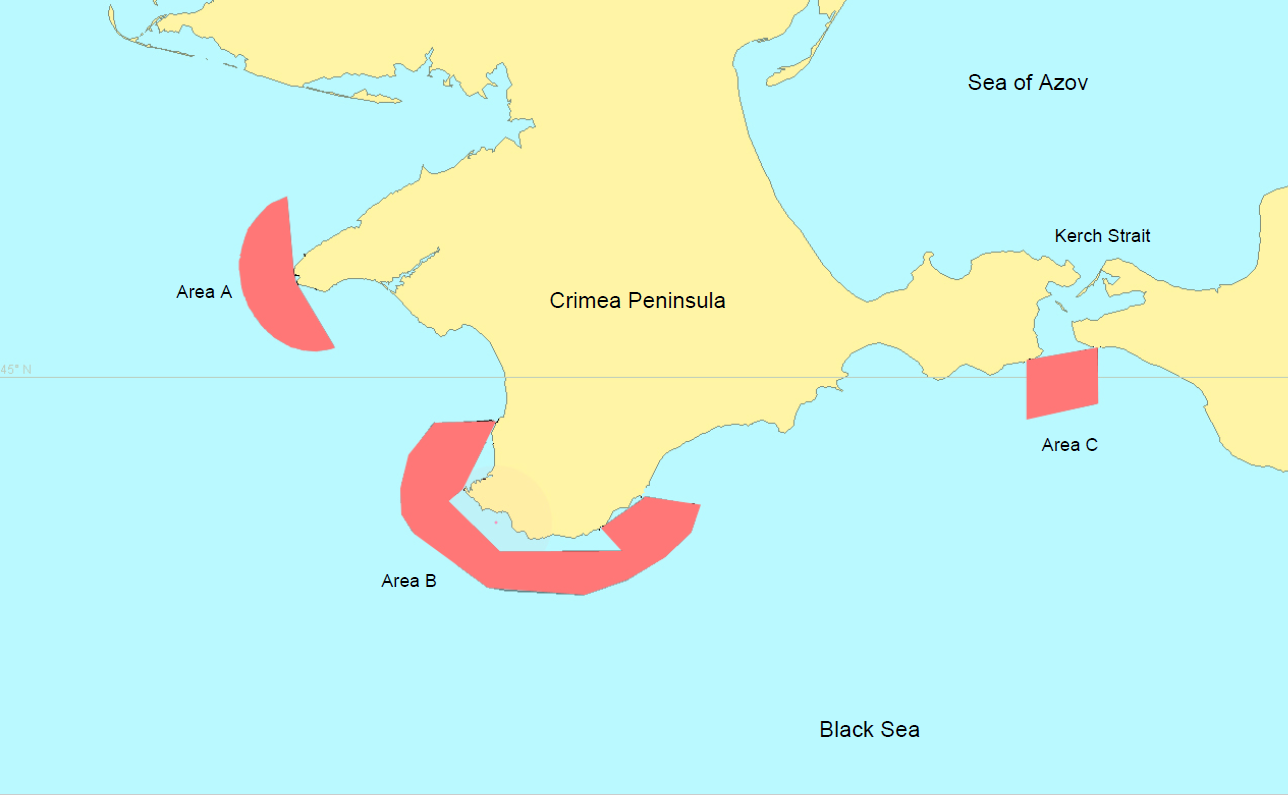 The announcement was also broadcast to ships by the NAVTEX station in Novorossiysk. The restriction of navigation in the indicated areas took effect from 2100 UTC 15 April 2021.

During the regular government press conference on 26 April 2021, the Federal Government was asked to state its position on the restrictions of innocent passage in the Black Sea. A spokesperson for the Federal Foreign Office stated:

It is of interest to note that the spokesperson distinguished between restrictions on innocent passage through the territorial sea in general, on the one hand, and such restrictions applied to the “territorial waters of the illegally annexed Crimea” and “international waters”, on the other. While the former were considered to be “unprecedented” and “very problematic in terms of international law” because of their long duration, the latter were considered to be “contrary to international law”. Two questions need addressing. First, whether the announced temporary suspension of innocent passage was generally in conformity with the international law of the sea and, second, whether the Russian Federation could validly make such an announcement with regard to the territorial sea of the Crimean Peninsula which Germany and the majority of other States considered to be part of the territory of Ukraine. It must be noted at the outset that, according to the geographical coordinates published in the notice to mariners, no “international waters” (i.e., exclusive economic zone or high seas) were affected by the restrictions.

Under both customary and conventional law of the sea, all States enjoy the right of innocent passage through the territorial sea. This right also extends to a State’s warships and other government ships operated for non-commercial purposes. Innocent passage may, however, be temporarily suspended. Article 25(3) UNCLOS provides:

“The coastal State may, without discrimination in form or in fact among foreign ships, suspend temporarily in specified areas of its territorial sea the innocent passage of foreign ships if such suspension is essential for the protection of its security, including weapons exercises.”

Ukraine protested the Russian announcement, inter alia, on the ground that Russia was not the “coastal State” with regard to the territorial sea surrounding the “temporarily occupied territory of the Autonomous Republic of Crimea and the city of Sevastopol.” According to the Ukrainian Government:

“These actions of the Russian Federation constitute another attempt to usurp Ukraine’s sovereign rights of a coastal state in violation of the norms and principles of international law, as Ukraine is in fact endowed with the right to regulate the navigation in these water areas of the Black Sea.”

The UN General Assembly condemned “the ongoing temporary occupation” of Crimea and urged the Russian Federation to “uphold all of its obligations under applicable international law as an occupying Power”. This raises the question of whether as an “occupying Power” the Russian Federation could temporarily suspend the innocent passage of foreign ships in the territorial sea of the occupied Crimean Peninsula. Occupation also extends to the occupied State’s territorial waters (internal waters and territorial sea) to the extent that effective control is established over the adjacent land territory. Under the law of armed conflict, the occupant may take measures to ensure “public order and safety” in the occupied territory, including its territorial waters. In particular, the occupying Power may take measures “to ensure the security of the Occupying Power, of the members and property of the occupying forces or administration, and likewise of the establishments and lines of communication used by them.” Under the laws of armed conflict, the occupying power has the right to suspend in all or in parts of the territorial sea of the occupied territory the innocent passage of foreign ships, if it considers it necessary for imperative reasons of security.

In determining whether such suspension is necessary, the occupying power enjoys a wide margin of discretion. Considering the heightened tensions between Ukraine and Russia and the reports of the United States sending two destroyers to the Black Sea in a show of support of the Ukrainian Government, Russian security concerns cannot be dismissed out of hand. On 9 April 2021, Russian Deputy Foreign Minister Alexander Grushko raised “concerns” over increasing Black Sea naval activity by powers that did not have a coastline in the region. The United States and NATO had indeed increased the number of visits and the length of the stay of their warships in the Black Sea since the beginning of 2021. In this connection it is of interest to note that the publication of the Russian notice to mariners coincided exactly with the expected arrival date of the U.S. warships in the Black Sea.

State practice shows that belligerent occupants may suspend innocent passage of foreign ships in the territorial sea of the occupied territory. For example, on 2 May 2004, the United States, acting as an occupying Power in Iraq, issued a notice to mariners establishing with immediate effect a 2,000-metre exclusion zone around the Khawr Al’Amaya and Al Basra oil terminals in the Persian Gulf and temporarily suspended “the right of innocent passage […] in accordance with international law around [these] oil terminals within Iraqi territorial waters.”

The question is thus not whether the Russian Federation is the “coastal State” with regard to the Crimean Peninsula but whether it is the “occupying Power” there. During the ongoing armed conflict between Russia and Ukraine the law of the sea is at least partly supplanted by the law of armed conflict and, in particular, the law of occupation. Germany and other States cannot consider Russia to be an occupying Power in Crimea and, at the same time, deny it the rights that come with that status.

The same applies to Ukraine’s argument that the Russian “actions are a gross violation of the freedom of navigation, guaranteed by the UN Convention on the Law of the Sea” because “Russia must not hinder or interfere with the transit passage through the international strait to the ports of the Sea of Azov.” The suspension of innocent passage through area C in front of the southern entrance to the Kerch Strait could make transit passage through the Kerch Strait impossible. However, the notice to mariners only speaks of the suspension of innocent passage, not transit passage. It could thus be possible that the notice leaves the latter unimpaired. Russian statements that suspension of innocent passage does not prevent the navigation through the Kerch Strait are, however, inconclusive as it is not clear whether they also refer to foreign warships or only to foreign private and commercial vessels.

Germany also expressed general concerns about the legality of the restrictions on navigation, irrespective of the question of whether Russia qualified as the “coastal State” with regard to Crimea. According to Article 25(3) UNCLOS the suspension of innocent passage is subject to four conditions: (i) suspension must be temporary; (ii) it may only be applied in specified areas of the territorial sea; (iii) it must be essential for the protection of the State’s security; and (iv) if must not discriminate in form or fact among foreign ships. In addition, such suspension must be duly published before taking effect – a requirement that was fulfilled by the NAVTEX broadcast on 14 April 2021 and the publication of the announcement in the Notice to Mariners.

The suspension of innocent passage applied to “foreign warships and other government ships”; that is, it applied equally to all States. Article 25(3) UNCLOS prohibits discrimination between States, not between types of ships. In particular, it does not require equal treatment of foreign government and commercial vessels. The suspension applied to three specified areas of the territorial sea of the Crimea Peninsula which covered less than 20% of its coastline. All three areas in question, especially area B in front of the Sevastopol Naval Base were of key strategic importance to the Russian military. Innocent passage may be suspended if this is “essential for the protection of [the State’s] security.” As shown above, Russia could argue that the ongoing conflict with Ukraine constituted a threat to its security. In a situation of heightened tensions, the occupying power may suspend the right of innocent passage in order to prevent foreign warships, especially those supporting the government of the occupied State, from navigating in close proximity to the conflict area.

This leaves the question of whether a suspension of innocent passage for a period of more than six months can be considered “temporary”. Practice shows that suspension of innocent passage for general security reasons, rather than mere weapons exercises, has often lasted for years, rather than months. For example, the United States have declared a three nautical mile naval defensive sea area in front of its Naval Base at Guantanamo Bay, Cuba, in which the right of innocent passage has been suspended at least since 2003. The 2,000-metre exclusion zone around the Khawr Al’Amaya and Al Basra oil terminals in the Persian Gulf, which had been declared by the U.S. occupying power in Iraq in May 2004, was continued by the Iraqi Government until at least February 2006. That the suspension of innocent passage may be of longer duration is also shown by the fact that protective mining in territorial waters prior to or during an armed conflict is still considered permissible under international law. In this case, the State will suspend innocent passage through the mined areas of the territorial sea.

Russia’s suspension of innocent passage in the territorial sea around the Crimean Peninsula was thus neither “unprecedented” nor clearly “contrary to international law”. This may explain the much more restrained statement by the U.S. State Department, which simply expressed “its deep concern” over the suspension of innocent passage and, unlike Germany, did not condemn it as contrary to international law. Accepting the measure as a lawful exercise of the powers of a belligerent occupant neither implies recognition of Russia’s illegal annexation of Crimea nor undermines support for Ukraine’s sovereignty and territorial integrity within its internationally recognized borders, extending to its territorial waters.

Category: Law of the sea