On 1 July 1997, the United Kingdom restored Hong Kong to Chinese sovereignty under a “one country, two systems” formula that provided for of a large degree of autonomy of the Hong Kong Special Administrative Region (HKSAR) within China. In particular, it was agreed that Hong Kong would be vested with independent judicial power, including that of final adjudication, and that the laws in force in Hong Kong would remain basically unchanged. When in February 2019 the Government of the HKSAR introduced a Bill which provided, inter alia, for extradition of fugitive offenders to the Chinese mainland, people in Hong Kong feared the undermining of Hong Kong’s separate legal system and its guarantees of rights and freedoms, many of which were not enjoyed in mainland China. In particular, it was feared that the proposed extradition arrangements would allow the Chinese Government to stifle political dissent in Hong Kong. The introduction of the Bill triggered multiple protests. In June 2019, large-scale protests led to violent clashes between demonstrators and the police. The German Federal Government expressed its concern over the Bill to the Hong Kong Government and announced that it was examining whether the current bilateral extradition agreement between Germany and Hong Kong could retain validity if the planned extradition law was adopted in its current form. On 15 June 2019, the Chief Executive of the HKSAR announced the suspension of the proposed Bill. However, violent protests continued, culminating in the storming of the HKSAR Legislative Council building and forcing the shutdown of the Hong Kong airport. Protestors called for a complete withdrawal of the Bill and demanded the resignation of the Chief Executive and the election of the Chief Executive by universal suffrage as foreseen in Hong Kong’s Basic Law.

One of the faces of the protest movement was 22-year-old Joshua Wong, who served as secretary-general of the pro-democracy party Demosistō which advocated “democratic self-determination” for Hong Kong. On 9 September 2019, Joshua Wong came to Berlin to rally support for the pro-democracy movement in Hong Kong. During his visit, he attended an event organized by German tabloid Bild in the building of the Federal Parliament which brought together political and civil rights activists from all over the world. In a brief speech at the event, he vowed to “protest until the day that we have free elections”. He also said:

“We are now standing between the free world and the dictatorship of China. If we are in the new Cold War, Hong Kong is the new Berlin. Hong Kong is now the wrestling ground for two very different, opposing ideologies – freedom, democracy, and human rights versus dictatorship [which disregards] fundamental rights. ‘Stand with Hong Kong’ is much more than just a mere slogan – we urge the free world to stand together with us in resisting the autocratic Chinese regime.”

At the event, Joshua Wong also met Federal Foreign Minister Heiko Maas. Posting a photo of himself and Foreign Minister Maas on his Twitter account, Wong wrote that they spoke on the “protests situation and our cause to free election and democracy in HK”. 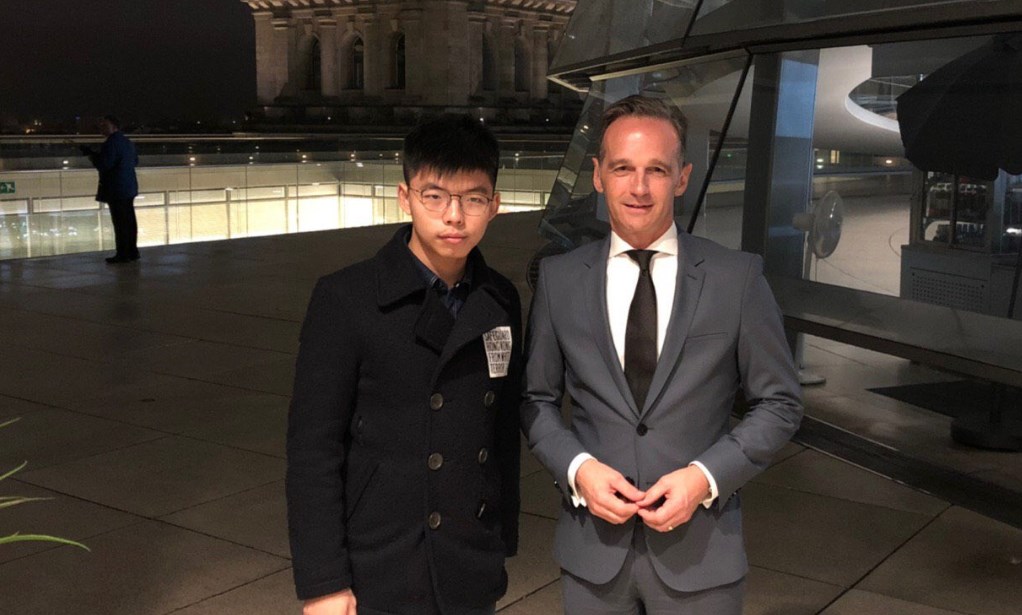 On 10 September 2019, the spokesperson for the Chinese Ministry of Foreign Affairs commented on the meeting between Mr. Wong and Minister Maas as follows:

“The German side allowed a Hong Kong separatist to enter its territory and engage in anti-China separatist activities there, and Foreign Minister Maas blatantly approached him. The Chinese side deplores and firmly opposes that. We lodge solemn representation with the German side.

Let me stress this again. Hong Kong affairs are entirely China’s internal affairs. No foreign government, organization or individual has the right to interfere. The words, deeds and attempts to brown-nose some Western forces for separatist purposes are doomed to fail. It is utterly wrong for certain German media and politician to put on a political show by newsjacking, which shows their disrespect for China’s sovereignty and interference in China’s internal affairs.

During her visit to China last week, Chancellor Merkel expressed explicit support for ‘one country, two systems’ and opposition against violence. We cannot help but ask this question: what is the German side’s intention to allow Joshua Wong’s entry and activities in Germany and his meeting with Foreign Minister Maas at this particular time? We urge the German side to honour its commitment and not to send wrong signals to the radical separatists in Hong Kong. We also urge Foreign Minister Maas to observe international law and basic norms governing international relations, and to contribute to rather than undermine China-Germany relations.”

The next day, the Chinese Embassy in Berlin also issued a statement on the presence of Joshua Wong in Germany, saying:

“For some time now, violent radicals have been deliberately destroying the rule of law and social order in Hong Kong. Their behaviour has significantly exceeded the limits of freedom of assembly and demonstration, and there have been extremely radical, violent criminal incidents. Joshua Wong is one of the leaders who instigated this extreme criminal violence. He advocates ‘Hong Kong independence’ and was most recently arrested for planning and participating in riots, attacking the Hong Kong police headquarters and other crimes. He has been released on bail only.

At a time when the HKSAR government and police are doing their utmost to end the chaos and restore order in order to guarantee the security of life and property for citizens, Germany is allowing a separatist like Joshua Wong to enter the country and allows him to use German territory to engage in anti-Chinese separatist activities. Foreign Minister Maas and a few other politicians meet with Wong in public. And there is a lot of media hype. All of this sends the wrong signals to the outside world, contradicts Germany’s support for the principle of ‘one country, two systems’ and its stand against violence and is not conducive to stabilize the situation in Hong Kong. With regard to these events, the Chinese side expresses our greatest dissatisfaction and our resolute protest and has already made demarches.

Hong Kong affairs are China’s internal affairs, and no foreign State, no organization, and no individual has the right to interfere, including Germany. […].”

The Chinese Foreign Ministry also summoned the German Ambassador to Beijing to strongly protest the meeting between Joshua Wong and Federal Foreign Minister Maas. The latter, however, was undeterred, saying that he would continue to meet Chinese human rights activists and lawyers, both at home and on trips to China. At a news conference on 12 September 2019, he told reporters:

“When the chancellor is in Beijing, she meets human rights lawyers and activists. When I am in Beijing, I do the same. And I do the same in Berlin. And that will not change in the future. Our fundamental position on China – one country, two political systems – is unchanged. We support the rights enjoyed by the people of Hong Kong under this Chinese policy.”

The meeting between Foreign Minister Maas and Joshua Wong also had repercussions at the United Nations. Germany had taken on a leading role as mediator in the Libya civil war. Under the heading of “Berlin process” it tried to bring the warring factions to the negotiating table. However, when the UN Security Council adopted a press statement on Libya on 2 December 2019, the reference to the “Berlin process” was deleted at China’s insistence. While the document noted the ongoing efforts in support of a Libyan-led and Libyan-owned political process “by the African Union, League of Arab States, European Union and others”, there was no more mention of Germany, a key mediator. Denying Germany credit for its central role in the mediation efforts in Libya was seen as an act of retaliation by China.

One of the principles of international law most often invoked in the relations between States is the principle of non-interference in internal affairs. The problem with this principle is that there is no general agreement on its content. What may constitute interference for one State may be regarded by other States as an exercise of their freedom of action, support for the right of self-determination, or an example of individuals’ freedom of expression. On 9 December 1981, the UN General Assembly adopted a non-binding resolution approving a “Declaration on the Inadmissibility of Intervention and Interference in the Internal Affairs of States”. The resolution was adopted with 122 States in favour, 22 against and 6 abstentions. While China voted with the majority, all Western States, including Germany, voted against the resolution. According to the Declaration, the principle of non-intervention and non-interference comprehends the duty of a State “to ensure that its territory is not used in any manner which would violate the […] territorial integrity and national unity or disrupt the political […] stability of another State”. The principle also comprises the duty of a State “to refrain from any action or attempt in whatever form or under whatever pretext to destabilize or to undermine the stability of another State or any of its institutions”, and the duty “to refrain from the promotion, encouragement or support, direct or indirect, of rebellious or secessionist activities within other States, under any pretext whatsoever, or any action which seeks to disrupt the unity or to undermine or subvert the political order of other States”. From a Chinese perspective, allowing Joshua Wong a political stage in Germany and providing him with a photo opportunity with the country’s Foreign Minister could well be interpreted as support of secessionist activities and action which seeks to disrupt the unity of China and undermine the political order and stability in the HKSAR. However, there is no legal basis in German law to prevent foreign political activists from speaking at a private event and to exercise their right to freedom of expression. There is also no rule in German domestic or international law that would bar the Federal Foreign Minister from meeting a foreign political activist at a private function. It was for that reason that Germany and other Western States opposed the excessively broad understanding in the Declaration of what constitutes interference in the internal affairs of States. The question of whether the events in Berlin constituted interference in the internal affairs of China under international law must be considered an open one. There was thus no clear legal basis for China to “urge Foreign Minister Maas to observe international law and basic norms governing international relations.” While meeting Joshua Wong in public and providing him with a photo opportunity many have been ill-advised in terms of Sino-German relations and may have been considered an unfriendly act by the Chinese side, it was by no means a clear-cut case of an illegal interference in the internal affairs of China.