Political protests in Thailand started in February 2020 and intensified in the second half of the year. The student-led protests were directed against the Government of Prime Minister Prayuth Chan-ocha. Demands of the protest movement included constitutional reform, an end to the repression of political activists and reform of the monarchy. The protesters, inter alia, took issue with the fact that Thailand’s King Maha Vajiralongkorn was living most of the year in Germany indulging in a luxury lifestyle while the country was suffering under the corona pandemic. They also criticised that the King wielded an inordinate amount of power in what was nominally a constitutional monarchy and that he might exercise his powers from Germany.

In October 2020, Germany’s embassy in Bangkok became the focus of the pro-democracy protests. After an ultimatum for Prime Minister Prayuth Chan-ocha to resign by 10 p.m. on 24 October 2020 lapsed without any action from the government, the protesters called for demonstrations at the German Embassy in Bangkok to draw attention to the King’s residence in Germany. Supporters of the pro-democracy movement were told to gather on 26 October 2020 in the evening at the embassy. “See you at the German embassy at 17:00 on Monday”, one of the protest groups posted on Twitter. This triggered the German Embassy to send the following Note Verbale to Thai Foreign Ministry:

“The Embassy of the Federal Republic of Germany presents its compliments to the Ministry of Foreign Affairs of the Kingdom of Thailand and has the honour to draw the attention of the Ministry to the planned demonstrations on 26 October 2020 beginning at 17.00h and naming the German Embassy as destination.

The Embassy of the Federal Republic of Germany recognizes the right of peaceful assembly of the citizens of the Kingdom of Thailand, including in proximity to the Embassy. At the same time, the Embassy recalls the responsibilities of the Ministry of Foreign Affairs of the Kingdom of Thailand under Art. 22 of the Vienna Convention on Diplomatic Relations and appreciates a proportionate level of protection for the abovementioned event. As in previous instances, the Embassy is ready to receive messages addressed to the Federal Government conveyed in a peaceful manner.

The Embassy of the Federal Republic of Germany avails itself of this opportunity to renew to the Ministry of Foreign Affairs of the Kingdom of Thailand the assurance of its highest consideration.”

On 26 October 2020, the German Embassy in fact saw two demonstrations. First, in the afternoon a small group of royalists rallied at the embassy and submitted a letter to embassy officials expressing concern about an effort to involve Germany in the ongoing conflict in Thailand. The royalists urged Berlin to listen and carefully consider information from all sides to prevent the escalation of the situation that stemmed from disinformation. Several hours later, at around 7.15 p.m., some 10,000 mainly young pro-democracy protesters marched to the German Embassy to deliver an “open letter from the citizens of Thailand” to the German Government. After the letter was read out in Thai, English and German, it was handed to embassy officials. The letter read in part as follows, “We request the German government to conduct an investigation and, disclose King Maha Vajiralongkorn’s entry and departure records, in order to determine whether His Majesty has exercised the sovereignty [of Thailand] on German soil.” The letter also listed specific State documents than the King may have signed while in Germany. The demonstrators dispersed without incident at around 9 p.m. 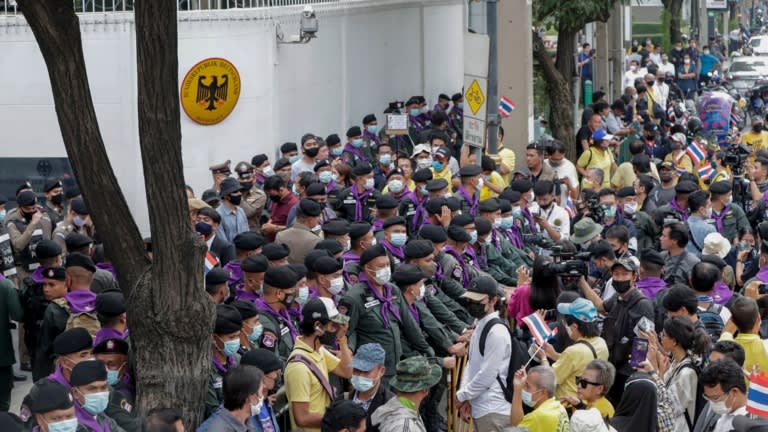 The Note Verbale was interpreted by parts of the media as “supporting the right of ordinary Thais to protest” and asking “only for a ‘proportionate’ level of protection during the pro-democracy rally.” This, however, seems to be a very partisan interpretation of the document. Rather than being an act of political support of the pro-democracy movement in Thailand, the Note highlights the security concerns of the German Embassy in Bangkok. In light of the pro-democracy movement’s call to march on the German Embassy, the German diplomats reminded the Foreign Ministry of Thailand’s obligations under the Vienna Convention on Diplomatic Relations which provides in Article 22 (2):

“The receiving State is under a special duty to take all appropriate steps to protect the premises of the mission against any intrusion or damage and to prevent and disturbance of the peace of the mission or impairment of its dignity.”

The Thai authorities fully lived up to their obligation to protect the German mission. Police were putting up metal barriers in front of the embassy and three lines of police protected the entrance to the embassy, with around three companies of riot police on standby to take care of the situation and safeguard the embassy.