Over the years, there have been a number of heated debates on the Middle East conflict at the United Nations. However, the exchange in the Security Council on 23 July 2019 between the Permanent Representative of Germany to the United Nations, Ambassador Christoph Heusgen, and the Assistant to the U.S. President and Special Representative for International Negotiations, Jason D. Greenblatt, should be remembered not just for the two countries’ different approaches to the Middle East peace process, but also, and more importantly, for their different outlooks on international law.

During the UN Security Council open debate on “The situation in the Middle East, including the Palestinian question”, the U.S. representative updated the members of the Council on the Trump administration’s peace efforts in the Middle East – the so-called “Deal of the Century”. With regard to the Israeli-Palestinian conflict he stated:

This conflict is also not going to be resolved by reference to international law when such law is inconclusive. We have all heard cogent arguments claiming international law says one thing or another about this or that aspect of the Israeli-Palestinian conflict. Some of those arguments are persuasive — at least to certain audiences, but none of them are conclusive. We will not get to the bottom of whose interpretation of international law is correct on this conflict. There is no judge, jury or court in the world that the parties involved have agreed to give jurisdiction to in order to decide whose interpretations are correct. International law with respect to this conflict is a tricky subject that could be discussed and argued for years without ever reaching a conclusion. We can therefore spend years and years arguing what the law is and whether it is enforceable and prolong the ongoing suffering or we could acknowledge the futility of that approach.

The conflict will also not be resolved by constantly referencing the hundreds of United Nations resolutions on the issue. The constant reference to these heavily negotiated, purposely ambiguously worded resolutions is nothing more than a cloak to avoid substantive debate about the realities on the ground and the complexity of the conflict. […] A comprehensive and lasting peace will not be created by fiat of international law or by these heavily wordsmithed unclear resolutions. 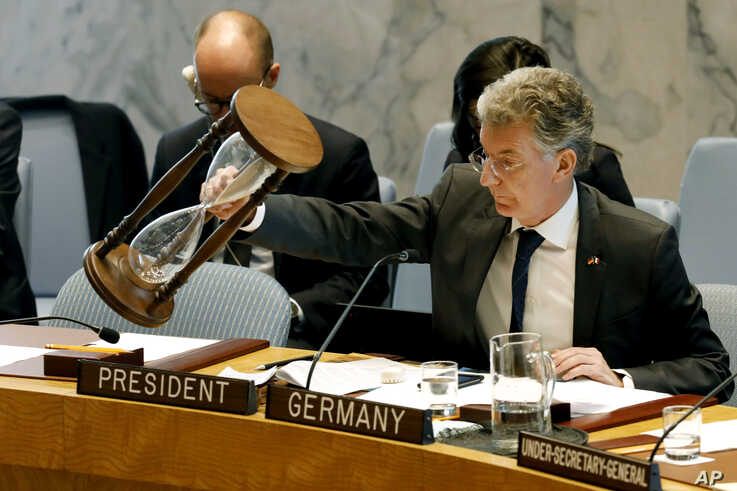 A lot has been said about settlements, although not by the representative of the United States in his intervention. For us, settlement activities are illegal under international law. They undermine the prospects for a negotiated two-State solution. The rhetoric has gone beyond talk of settlements. We now hear rhetoric alluding to the possible annexation of parts of the West Bank. We are extremely concerned. Germany will not recognize changes to the 1967 lines, including to Jerusalem; we will recognize only changes that are the result of negotiations. […]

The German Ambassador’s comments came a day after Israel had begun demolishing dozens of Palestinian homes in East Jerusalem in one of the largest operations of its kind in years, despite the fact that the Security Council had condemned “all measures aimed at altering the demographic composition, character and status of the Palestinian Territory occupied since 1967, including East Jerusalem, including, inter alia, the […] demolition of homes and displacement of Palestinian civilians, in violation of international humanitarian law and relevant resolutions”.

The German Ambassador’s insinuation that the United States believed in the force of the strongest, violated binding Security Council resolutions and treated international law as an à la carte menu was widely reported in the media. The German criticism roiled the Trump administration’s Middle East peace team and prompted a fierce pushback, both privately and publicly. In an unprecedented move, on 8 August 2019 the U.S. representative published an Op-Ed in German in the daily Die Welt, accusing Ambassador Heusgen of “a profound and damaging mischaracterization” of his remarks in the Security Council. He wrote:

[…] For the avoidance of any misunderstandings I thus feel compelled to publicly comment on what, in the United States’ view, is a profound and damaging misrepresentation of our remarks during the monthly debate on the Middle East in the United Nations Security Council on July 23.

My colleagues in the White House responsible for peace negotiations and I were deeply troubled by the Permanent Representative of the Federal Republic of Germany portraying the United States as a country believing that might means right.

Following the U.S. intervention, Ambassador Heusgen told our colleagues on the UN Security Council that Germany does not ‘believe in the force of the strongest’. With respect, Mr. Ambassador, neither does the United States. In our intervention, we clearly stated that a solution cannot be forced upon the parties, and that the only way forward is direct negotiations between Israel and the Palestinians.

Our point was that all the UN Security Council resolutions passed with the intent of providing a framework for resolving the Israeli-Palestinian conflict have so far failed to achieve any progress. Moreover, history shows that the reflexive reference to these ambiguously worded, highly controversial resolutions serves as a pretext to avoid substantive debate about the realities on the ground and the complexity of the conflict.

There is no disagreement between the United States and the Federal Republic of Germany about the utility of UN Security Council resolutions that are clear and effective. However, in the case of the Israeli-Palestinian conflict, conflicting interpretations of these resolutions have sparked disagreement more often than consensus.

Further, speaking frankly, it is disingenuous to insist on the United Nations as the reference point for the resolution of the Israeli-Palestinian conflict without acknowledging the deep, pervasive, anti-Israel bias in the UN system.

We want to start a new, realistic discussion that looks to the future, rather than dwells on the past. We call on the parties to return to the negotiating table and hold direct talks on how a genuine foundation for peace can be established. And we would welcome the support of the Federal Government and the German people in this endeavour.”

The Op-Ed, however, did not change the German Government’s view. Less than a fortnight later, Ambassador Heusgen once again called the United States out for “not complying with all UN resolutions if, for example, they transfer the U.S. Embassy from Tel Aviv to Jerusalem.”

The statement made by the German Ambassador must be seen against the background of a major shift of U.S. policy on the Israeli-Palestinian conflict. For several decades U.S. governments tried to mediate between the conflicting parties and complied – sometimes reluctantly – with Security Council resolutions which the United States had either voted for or, at least, abstained on. Under the Trump administration, on the other hand, the United States openly took the side of Israel and abandoned the established international consensus on the illegality of the annexation of occupied territory, the status of Jerusalem and the invalidity of Israeli settlements in territories occupied in 1967. During the presidency of Donald Trump, the United States recognized the Israeli annexation of the occupied Syrian Golan, recognized Jerusalem as the capital of Israel and relocated its embassy from Tel Aviv to Jerusalem, and declared that it would consider the establishment of Israeli civilian settlements in the West Bank as “not per se inconsistent with international law”. Germany, for its part, continued to adhere to the established international consensus that these acts violate international law.

Germany was quite right in opposing the U.S. Government’s view that the relevant UN resolutions were unclear or ambiguous, that international law was inconclusive or open to different interpretations, and that there was no international consensus in case of the Israeli-Palestinian conflict. Quite the opposite is actually true.

UN resolutions are crystal clear. The territories captured by Israel during the Six-Day-War in June 1967 – the Gaza Strip, the West Bank, including East Jerusalem, and the Syrian Golan – are “occupied territories”. In these territories, Israel has the status of an “occupying Power” bound by international humanitarian law, including the Fourth Geneva Convention relative to the Protection of Civilian Persons in Time of War. The establishment of settlements by Israel in these territories “constitutes a flagrant violation of international law” and the United Nations have repeatedly demanded that “Israel immediately and completely cease all settlement activities in the occupied Palestinian territory, including East Jerusalem”. The annexation of these territories acquired by force is inadmissible. In particular, any unilateral measures to change the status of Jerusalem were declared invalid.

The United Nations in its resolutions just spelled out the international law rules applicable to the Israeli-Palestinian conflict. These rules are by no means inconclusive. On the contrary, these rules could not be more explicit. The illegality of territorial acquisition resulting from the use of force is a norm of customary international law. The annexation of East Jerusalem and the Syrian Golan by Israel is thus illegal and invalid, as would be any annexation of parts of the West Bank. The right of self-determination of the Palestinian people is also part of customary international law, which Israel is obliged to respect. Any settlement activities and other measures adopted by Israel to alter the demographic composition of the West Bank severely impede the exercise of that right. International humanitarian law also establishes clear obligations for Israel as an “occupying Power”. For example, Israel is prohibited from taking any measures “in order to organize or encourage transfers of parts of its own population into the occupied territory.” This led the International Court of Justice (ICJ) to conclude that “the Israeli settlements in the Occupied Palestinian Territory (including East Jerusalem) have been established in breach of international law.”

International consensus may not be the same as international law, but the international consensus with regard to the Israeli-Palestinian conflict has been based on international law. The U.S. Government may have decided to step outside that international consensus, but that does not call into question the existence of such a consensus. It was only under the Trump administration that the United States dropped the term “occupied territories” when referring to the Syrian Golan, the West Bank (including East Jerusalem) and Gaza, and accused other States of having “weaponized” the term “occupation” in order to criticise Israel. Instead it now referred to “Israeli-controlled” territory, or an “unresolved dispute” over claims to certain land. This is even more remarkable as even the Israeli Supreme Court has accepted as a general point of departure for all its considerations that Israel holds the West Bank “in belligerent occupation (occupatio bellica)”. For many years, the United States had joined the international consensus that Israel’s measures to alter the status of Jerusalem and its settlements in the occupied territories were contrary to international law. As recently as 23 December 2016, the United States representative on the Security Council made the following statement with regard to Israeli settlement activity in territories occupied in 1967: “Today the Security Council reaffirmed its established consensus that settlements have no legal validity.”

The United States may have changed its position on the Israeli-Palestinian conflict and may today reject the international consensus it helped to forge, but this should not detract from the fact that such a consensus continues to exist, is firmly based on international law and is reflected in the resolutions of the United Nations.