On 4 June 2016, an Israeli citizen used an online booking website to book a seat on a Kuwait Airways flight from Frankfurt to Bangkok, with an approximately five-hour stopover in Kuwait City. When he later filled in the passenger details – including his Israeli citizenship – the airline cancelled his flight and offered to arrange alternative transport with another airline at their own expense. The man declined the offer and instead brought a claim before the Regional Court in Frankfurt, asking that Kuwait Airways either be required to fulfil their contractual obligations to fly him to Bangkok, or else that he be compensated for discrimination.

The fully State-owned Kuwait Airways based their decision to cancel the passenger’s booking on a Kuwaiti law passed in consequence of a 1954 resolution of the Arab League Council concerning a unified boycott of Israel, which Kuwait does not recognise as a State. Article 1 of Law No. 21 of 1964 provides in the relevant parts as follows:

“enter[ing] into an agreement, personally or indirectly, with entities or  persons residing in Israel, of Israeli citizenship, or working for or in the interest of Israel, regardless of their domicile, whenever the object of the agreement is to conduct commercial deals, financial transactions or any other dealings, regardless of nature. Corporations and facilities, regardless of nationality, that have interests, branches or general agencies in Israel  are considered among the entities and persons covered by the prohibition, in accordance with the preceding item and the decision of the Overseer of  Boycott Affairs pursuant to the recommendations of the Conference of  Liaison Officers.”

Entering into such agreements may result in “punish[ment] [by imprisonment] with hard labour”.

The Regional Court dismissed the passenger’s claims in a judgment given on 16 November 2017, on the grounds that the policy was not discriminatory in a way protected under German anti-discrimination laws, which prohibit discrimination based on, inter alia, race, religion and ethnic background but not nationality. The claimant’s contention that the discrimination was based on religion rather than nationality was dismissed. This judgment was upheld at appeal by the Higher Regional Court of Frankfurt in September 2018, ruling that Kuwait Airways was within its right to refuse to transport an Israeli passenger. 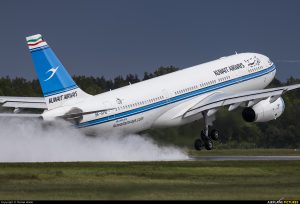 A Kuwait Airways plane taking off at Frankfurt airport [https://cdn.airplane-pictures.net/images/uploaded-images/2017/5/14/901508.jpg]

While the Higher Regional Court of Frankfurt called the Kuwaiti boycott law “unacceptable” and found it to be contrary to “the principles of the international legal community” and “fundamental values of the German legal system”, the Court nevertheless held that it was “factually impossible” for the airline to fulfil its contract because the flight required a stopover in Kuwait City, which was under Kuwaiti jurisdiction, and Kuwait denied entry to Israeli citizens.

The Higher Regional Court in Frankfurt made it clear that Kuwait’s policy of denying entry to Israeli citizens was not contrary to international law. The Court held:

Article I Section 1 of the International Air Services Transit Agreement of 7 December 1944, which was referred to by the claimant at first instance, only grants the privilege to fly across the territory of another State without landing (no. 1), as well as the privilege to land for non-traffic purposes, such as refuelling without taking on or discharging passengers or cargo (no. 2). Neither freedom is affected in the present case. In addition, according to Article I Section 2 of the aforementioned ‘Agreement’, the exercise of the privileges in Section 1 shall be in accordance with the provisions of the Convention on International Civil Aviation. Article 13 of that Convention provides that the laws and regulations of a contracting State as to the admission to or departure from its territory shall be complied with. Accordingly, every airline that lands or even stops in Kuwait must comply with the regulations in force there and is therefore prevented by Kuwaiti regulations from carrying passengers with an Israeli passport, be it for entry or transit.

Likewise, the agreement on air services between the Federal Republic of Germany and the State of Kuwait of 30 April 1974 does not include any regulations that oblige the State of Kuwait to allow passengers to enter Kuwaiti territory regardless of their nationality, even if it is only for transit purposes.

Finally, the United Nations Charter referred to by the plaintiff does not contain any international prohibition preventing States from imposing restrictions on Israeli citizens entering their territory.”

The Higher Regional Court in Frankfurt indicated that it found its own decision unsatisfactory but stated that it was not for the courts to bring about a change to the practice of Kuwait Airways but for German foreign and legal policy.

On 28 November 2017, after the Regional Court of Frankfurt had given the first-instance judgment, the German Ambassador to Kuwait raised the issue with the Kuwaiti Government and delivered a letter by the acting Federal Minister of Transport, expressing the Federal Government’s incomprehension at the Kuwaiti boycott policy with regard to Israel. The Minister requested government-to-government consultations on the matter. In a statement, he said:

“During the talks, we will make it unmistakably clear that there must be no discrimination when flying to and from Germany. Everyone must have freedom of movement. I will insist on Kuwait respecting this principle. We will make our expectations clear that such a case must not be repeated.”

In response to parliamentary questions brought in January 2018, the Federal Government highlighted that the Federal Minister for Transport and Digital Infrastructure had again communicated their concerns about the discriminatory nature of the airline’s policy, and the underlying Kuwaiti law:

“Following the judgment of the Frankfurt am Main Regional Court on 16 November 2017, which denied the plaintiff’s right to be transported by Kuwait Airways in the first instance, Federal Minister Christian Schmidt made it clear to his Kuwaiti counterpart on 20 November 2017 that it is unacceptable to exclude citizens from the use of transport because of their nationality. In a letter dated 12 December 2017, Federal Minister Schmidt also asked his Kuwaiti counterpart for bilateral consultations pursuant to Article 10 of the Agreement of 30 April 1974 between the Federal Republic of Germany and the State of Kuwait for Air Services.”

In response to three further questions, the Government made it clear that Kuwait was nevertheless within its rights under international law to exclude Israelis from the country if they so wished:

“According to international law, States are free to decide which foreign nationals they allow to enter their territory. Transport to the destination country is dependent on the recognition of foreign travel documents and the fulfillment of the entry or transit regulations applicable there. […] The Federal Government is committed to ensuring that Israeli citizens are transported without discrimination. Diplomatic and legal options are being examined.”

This makes it clear that Germany does not see any international law basis for its demand that Kuwait Airways transport Israeli passengers to or via Kuwait City. Diplomatic measures also seem to have been unsuccessful thus far, as Kuwait Airways still operates air services from Germany and continues to refuse to transport Israeli passengers. Despite the Federal Minister of Transport’s demand that such a case must not be repeated, in September 2018 Kuwait Airways refused to transport another Israeli citizen from Munich to Colombo, via Kuwait City, after he inquired about kosher food and divulged his Israeli citizenship.

The refusal of Kuwait Airways to transport Israeli citizens in Germany must be distinguished from similar cases in the United States and Switzerland.  In 2015, the U.S. Department of Transportation demanded that Kuwait Airways comply with domestic anti-discrimination laws and transport Israeli passengers between New York and London, or else risk their take-off and landing rights being revoked. Rather than do so, Kuwait Airways suspended this specific route altogether.  Following litigation in Switzerland in 2016, Kuwait Airways cancelled its intra-European routes. National anti-discrimination laws can only be applied successfully if the flights in question are not destined for Kuwait and do not involve stopovers in that country. All flights the airline is currently operating – including from New York, Geneva, and Germany –travel directly to or from Kuwait City, allowing Kuwait Airways to justify its policy on the grounds both of Kuwait’s territorial sovereignty, and the impossibility of transporting Israeli passengers to or from a country where their passports are not recognised as valid and for which they are unable to obtain a visa.

“In recent months, the Federal Government has worked intensively in talks at various levels to make it possible for Israeli citizens to fly to Kuwait and to make it clear to the Kuwaiti side that a solution is of great importance for Germany. The Federal Government has pointed out that the additional take-off and landing rights requested by Kuwait will not be granted until Kuwait shows concessions on this matter.”

The decisions of the German courts are correct both in terms of domestic and international law. If anyone is to blame for the unacceptable discriminatory practice of Kuwait Airways it is not the courts but the Federal Government which is not prepared to revoke Kuwait Airways’ take-off and landing rights in Germany and pay the price for a principled stance, namely the loss of take-off and landing rights for German airlines in Kuwait and, consequently, the end of direct air services between Germany and Kuwait.