The Republic of Cyprus has had a troubled history ever since attaining independence in August 1960. The partnership government of Greek and Turkish Cypriots under the Cypriot Constitution came to an end in December 1963 in the wake of civil war-like hostilities between the two communities which led the UN Security Council to establish the United Nations Force in Cyprus (UNFICYP). Matters came to a head in July 1974 when, in response to a violent coup d’état instigated by the Greek military junta in Athens and aimed at uniting the island with the Greek motherland, Turkish armed forces landed in northern Cyprus in order to protect Turkish Cypriots. The Turkish intervention led to the de facto partition of the island into a Greek Cypriot south and a Turkish Cypriot north which has persisted ever since.

Over the years, numerous attempts at reunification have been made under the auspices of the United Nations – and all have failed. The latest UN-sponsored negotiations between the two communities in the Swiss resort of Crans-Montana broke down in July 2017. The UN Security Council nevertheless expresses its full support for the Secretary-General’s “Good Offices to remain available to assist the sides, should they jointly decide to re-engage in negotiations with the necessary political will.”
During the visit of the leaders of the two communities to New York at the end of September 2019, the Secretary General engaged in separate discussions with the two leaders and other interested parties. In those discussions, the Secretary-General reconfirmed that his good offices remained available to support the parties in their efforts to finalize the terms of reference that would enable structured and results-oriented negotiations leading to a settlement of the Cyprus conflict. The two leaders agreed to hold a joint informal meeting with the Secretary-General as a potentially constructive step in trying to find a mutually acceptable way forward.
This meeting was held at the Hotel Adlon Kempinski in Berlin on 25 November 2019. Both Cypriot delegations and the UN Secretary-General and his team stayed in the Adlon – one of the leading hotels of the world, situated next to the Brandenburg Gate in the heart of the German capital. 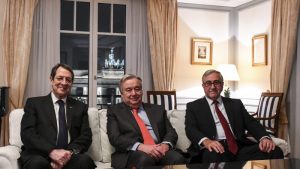 Asked about the German Federal Government’s role in the informal Cyprus talks in Berlin, the spokesperson for the Federal Foreign Office, Maria Adebahr, declared:

“We are in favour of the resumption of the UN-led negotiation process in the Cyprus conflict. For that reason, at the request of the United Nations we are supporting the informal trilateral meeting of UN Secretary-General Guterres with the two Cypriot community leaders in Berlin today. We are providing both financial and logistical support – I assume, in English, as the language of diplomacy, this is called ‘good services’. So we are providing good services to ensure that the participants can talk to each other in a trusting, calm atmosphere, because we are in favour of this process in the direction of a lasting peace and solution being resumed.”

Good offices (bons offices, gute Dienste) are a diplomatic means for the peaceful settlement of international disputes. A third party, either on its own initiative or upon request, but in all cases with the consent of the disputing parties, seeks through diplomatic means to initiate or to bring about direct negotiations between the disputing parties without participating substantively in the discussion of the dispute. The third party can be a single State, a group of States, a respected individual or an organ of an international organization such as the UN Secretary-General. Article IX of the American Treaty on Pacific Settlement (Pact of Bogotá) defines good offices as follows:

Good offices usually come to an end with the beginning of actual negotiations between the disputing parties.
While the UN Secretary-General clearly engaged in good offices stricto sensu, the same cannot be said about the German Government. However, the term is also used in a broader sense, as referring to any form of assistance provided by a third party which facilitates the opening of direct negotiations between the disputing parties. In this sense, the provision of financial and logistical support such as the provision of accommodation, conference facilities and interpretation services, or the preparation of a summary record of informal talks may also be regarded as good offices. The German Government, however, should not overplay its role in the Berlin talks. Rather than being a provider of good offices, it was simply a facilitator of the mission of good offices of the UN Secretary-General.