The 47-member Human Rights Council (HRC) was established by the United Nations General Assembly on 15 March 2006. Members are elected directly and individually by the majority of the members of the General Assembly, through a secret ballot. Membership is based on equitable geographical distribution, and seats are distributed among the five regional groups within the United Nations system. Germany is part of the so-called “Western European and other States” group (WEOG), which holds seven seats on the Council. Members of the Council serve for a period of three years, and after two consecutive terms are not eligible for immediate re-election. Germany served on the HRC as one of its founding members from 2006 to 2009, and again for the 2013-2015 and 2016-2018 terms. After the withdrawal of the United States from the HRC, Germany had announced in February 2019 that it would run again for the Council – a year earlier than originally planned.

On 17 October 2019, Germany was once again elected to the HRC as one of 14 new Council members that will serve from 1 January 2020 to 31 December 2022. Germany ran on a clean slate ballot, with Germany and the Netherlands being the only candidates for the two vacant seats of the WEOG. In an uncontested vote Germany received 174 votes while the Netherlands gained 172 votes. Only two States – Namibia and Sudan – received more votes than Germany which came joint third with Indonesia. The German Government treated the vote as a testament to the great confidence of the international community in Germany’s commitment to human rights. Federal Foreign Minister Mass issued the following statement:

“Germany’s election to the Human Rights Council of the United Nations is a token of confidence in our country and a tribute to our consistent stand on human rights around the world. Seventy years after the adoption of the Universal Declaration of Human Rights, its proclamation of dignity and personal freedom remains merely a distant promise for many. Particularly at a time when other countries are withdrawing from the Council, Germany will stand up for the protection and promotion of human rights across the world.”

The endorsement of Germany, however, is not as glowing as it may seem at first sight, or as it was portrayed by the German Foreign Minister. Over the last ten years, in each uncontested election the leading State in the WEOG received more, and only in one case the same number of votes than Germany did in the present election. For example, Portugal gained 184 votes in 2014, and Spain and Italy both received 180 votes in the 2017 and 2018 elections, respectively. In fact, Germany gained the same number of votes as in 2015 when it last stood in an uncontested election and came second behind Switzerland. In the previous elections in 2012 and 2006, when there were more candidates than seats for the WEOG, Germany gained 127 and 154 votes, respectively. 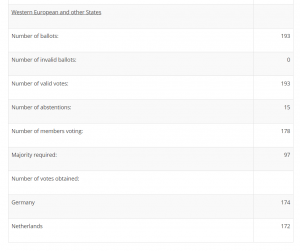 While in all HRC elections over the last ten years, with the exception of 2018, the number of abstentions in the elections of the WEOG members was higher than for any other regional group, in the October 2019 election the number of abstentions reached an all time high. As the ballot is secret one can only speculate which countries abstained and why. Abstention, like casting an invalid ballot, is usually an expression of political protest. Rather than not voting for the two candidates of the WEOG, 15 States, which were present and voted in the elections of the candidates from other regional groups, decided not to vote at all. This may have been a way for abstaining States to show their displeasure with both candidates – Germany and the Netherlands – or a sign of protest against the practice of the WEOG to put forward a clean slate in which the number of candidates is equal to the number of vacant seats. As, however, other regional groups also practice the clean slate principle the former seems to be the more likely explanation. Germany’s “consistent stand on human rights around the world”, which in many parts of the world is still considered an interference in the internal affairs of States, might not have made it popular with everybody.