On 16 July 2019, Germany deposited its instrument of accession of the Hong Kong International Convention for the Safe and Environmentally Sound Recycling of Ships with the IMO Secretary-General at the International Maritime Organization (IMO) Headquarters in London, thus becoming the 13th party to the Convention. 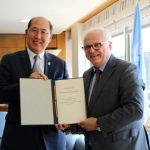 The application of the Convention is limited to ships over 500 gross tonnage which fly the flag of a party and operate not solely on national voyages, and ship recycling facilities operating under the jurisdiction of a party.

Since the 1970s, ship breaking has shifted from Europe to Asia. Shipyards in Europe became too small for large sea-going vessels and an expensive work force as well as strict environmental provisions gradually drove up the costs. Of the approximately 1,000 ships dismantled each year, some 85% are broken down at beach facilities in South East Asia where work and wage conditions as well as the pollution standards are less strict than in Europe. The Convention is thus also a means to establish a more level playing field in the ship recycling industry.

The Convention will come into force 24 months after ratification by 15 States with a total of 40% of the world gross tonnage of merchant shipping and at least 3% of the annual global total tonnage of recycled ships. According to the IMO, the thirteen contracting States to the Convention now represent 29.42% of world merchant shipping tonnage. Germany added just 0.56% to that figure. The combined ship recycling volume is currently below 1% of the gross tonnage of the 13 contracting States’ merchant fleet. The entry into force of the Convention may thus still be some time off.