At the end of 2017, the research vessel “R/V Meteor”, owned by the Federal Republic of Germany, conducted marine scientific research with permission from the Greek Ministry of Foreign Affairs in the Aegean Sea. The research involved taking core samples from the seabed. On 29 December 2017, while the vessel was operating in the sea area between the Greek islands of Samothrace and Lemnos, two Turkish warships approached the “R/V Meteor” and warned the vessel that it was conducting research in Turkish waters without permission and asked it to leave or seek permission from the Turkish authorities in order to continue its research. While the details of the case are unknown, the Greek media speculated that in order to complete its research programme the master of the vessel requested permission from Turkey to continue research in the Aegean Sea. According to the official project plan the “R/V Meteor” was scheduled to conduct research, inter alia, in the sea area off Kythira from 6 January 2018.

On 3 January 2018, the Turkish authorities issued two navigational telex – Navtex 0020/18 and 0021/18 – which informed seafarers that the “R/V Meteor” would carry out scientific research until further notice in nine designated sea areas in the central and southern Aegean Sea within a triangle formed by the Greek islands of Lemnos, Carpathos, and Kythira. 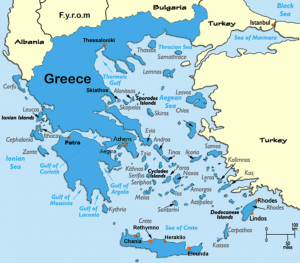 The Turkish Navtex were interpreted by Greece as signifying a Turkish claim to the Aegean Sea as far west as the 23rd meridian, that is, right up to the Greek island of Kythira lying opposite the south-eastern tip of the Peloponnese peninsula. The Greek Government took the view that by applying to Turkey for permission to conduct research in the relevant sea areas the “R/V Meteor” had implicitly recognized Turkey’s claims to the Aegean Sea. As a result, within hours of the Turkish Navtex the Greek Government revoked the “R/V Meteor’s” permission to conduct scientific research in the Aegean Sea and prohibited any further research activities. The Greek coast guard was instructed to arrest any crew member violating the research ban.

On the same day, the Greek authorities published their own Navtex HA29-1/18 which read as follows:

“Attention to all mariners.

Unauthorized stations have broadcast Navtex messages No 0020/18 and 0021/18 for scientific research by R/V Meteor until further notice in maritime areas of Greek jurisdiction.

As a result the aforementioned messages become invalid. Mariners are advised to attend the competent Greek Navtex stations of Kerkyra, Limnos and Heraklion.

The only officially authorized Navtex stations in the Ionian Sea (Eastern to 019E), Aegean Sea and East Med (Western to 030E) outside of territorial waters, are the Hellenic Navtex stations (Kerkyra-K, Limnos-L, and Irakleio-H).”

The Turkish authorities responded to this with another Navtex which read as follows:

Navtex messages No 020/18 and 021/18 are valid and effective. Turkish Navtex stations of Izmir and Antalya will continue to serve for mariners security. Navwarn messages No LA71-4/18 and HA29-1/18 broadcasted by an unauthorized station, therefore is invalid.”

The “R/V Meteor” turned to the German Federal Foreign Office for assistance but Greece refused to issue a new permission. As a consequence, the “R/V Meteor” ended the research expedition prematurely and made its way to Italy.

The “R/V Meteor” was caught up in the longstanding disputes between Greece and Turkey in the Aegean Sea. The two States disagree, inter alia, over the sovereignty over certain islands in the Aegean Sea, the maximum breadth of their territorial seas in the area, the rules applicable to the delimitation of their territorial seas, the extent and delimitation of their national airspace, and the question of whether and, if so, to what extent the Greek islands off the Turkish mainland coast should be taken into account for determining the Greek and Turkish exclusive economic zone and continental shelf in the Aegean Sea. These disputes also affect marine scientific research by other States in the Aegean Sea.

Marine scientific research in the territorial sea, in the exclusive economic zone and on the continental shelf may only be conducted with the consent of the “coastal State”. The decisive question for States wanting to conduct research in the Aegean Sea area is thus who the “coastal State” is for the purposes of giving consent. The Federal Foreign Office was aware of Greek and Turkish sensitivities. The guidance note on applications for permission to conduct marine scientific research provided with regard to Greece and Turkey:

Notification of port entry at least 24 hours in advance

Notification of expedition at least six months prior to departure

Considering that any research expedition in the Aegean Sea by a German research vessel must also notify Turkey, the issuance of Navtex 0020/18 and 0021/18 need not necessarily have been triggered by a request for permission addressed the Turkish authorities by the master of “M/V Meteor”. On the contrary, Turkey may have used the information previously provided by Germany to escalate its conflict with Greece in the Aegean Sea by issuing the Navtex in question.

As the research of the “R/V Meteor” included “drilling into the continental shelf” Greece would have been entitled, at its discretion, to withhold its consent to the conduct of the marine scientific research project in the Aegean Sea. However, this does not mean that Greece was entitled unilaterally to revoke its consent at will. The revocation of consent by Greece, on the ground that Germany also notified Turkey of the marine scientific research activities in the Aegean Sea, or that the master of the vessel also requested permission from the Turkish authorities, is subject to the Convention’s compulsory dispute settlement provisions. As both Greece and Germany have chosen the International Tribunal of the Law of the Sea as their preferred means of dispute settlement, Germany could have brought the matter before the Hamburg Tribunal.

Category: Law of the sea