On 22 January 1963, France and Germany concluded the Treaty concerning Franco-German co-operation (the “Elysée Treaty”). The Treaty took the relationship between the two countries to a new level providing for close cooperation in the areas of foreign affairs and defence, as well as education and youth affairs. On the basis of this Treaty, Germany cooperates more closely with France than with any other country.

For example, in the area of foreign affairs the two countries agreed to “consult each other, prior to any decision, on all important questions of foreign policy, and particularly on questions of mutual interest, with a view to achieving as far as possible an analogous position.” 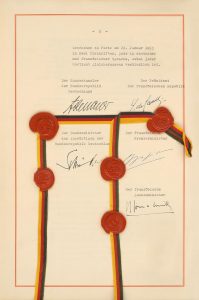 The Treaty was accompanied by a joint declaration, signed by French President Charles de Gaulle and Chancellor Konrad Adenauer, which provided in part:

“Convinced that the reconciliation between the French people and the German people, terminating a centuries-old rivalry, is a historic event which radically transforms the relations between the two peoples,

Conscious of the solidarity which unites the two peoples as regards both their security and their economic and cultural development,

Noting in particular that youth has become conscious of this solidarity and is destined to play a decisive role in the consolidation of Franco-German friendship,

Recognizing that a strengthening of the co-operation between the two countries is an essential step towards a united Europe, which is the goal of both peoples,

Have signified their agreement to the organization and principles of co-operation between the two States, as set forth in the Treaty signed this day.”

The full text of the Treaty and the Declaration (in English) may be found here.