Amid a political crisis marked by almost daily demonstrations and clashes between protesters and the security forces, which have seen more than 100 people killed so far, President Nicolás Maduro ordered elections for a national constituent assembly to draft a new constitution – a move rejected by the opposition. The opposition, who blamed President Maduro for an economic crisis that caused shortages of food, medicine and basic supplies, instead demanded new elections to remove Maduro from power. Despite a boycott by the opposition, a vote for the national constituent assembly was held on 30 July 2017 amid violent protests. President Maduro argued that the new constitution would bring peace to a divided country, while the opposition called it an assault on democracy. Several opposition leaders were detained. The newly constituted National Constituent Assembly removed the country’s chief prosecutor, Luisa Ortega Diaz, from office and assumed the legislative powers of the opposition-controlled National Assembly, thus, as a matter of fact, neutralizing the parliament that had been democratically elected in 2015. The opposition accused President Maduro of a constitutional coup d’état.

On 2 August 2017, the German Government criticized President Maduro for the escalation of violence and called for the immediate release of several opposition politicians in Venezuela. During a press conference the deputy government spokesperson said:

“In Venezuela, the situation has escalated further following serious riots last weekend that left at least another 15 people dead, scores of injured and 100 arrests. With the election to the constituent assembly, the Government of Venezuela has acted contrary to the will of the large majority of the population, and has executed the election with violent means. It has also ignored the recommendations of the United Nations and numerous representatives of the international community.

An assembly that has been established in such circumstances without a national consensus and with violent means cannot claim any legitimacy in the view of the Federal Government. President Maduro has once again demonstrated that holding on to power is more important to him than the well-being of his own people. The arbitrary arrest of the opposition politician Leopold López and the mayor of Caracas, who have campaigned peacefully for the democratic development of the country, marks another low for Venezuela. The Federal Government calls for their immediate release, as well as the release of other detainees who simply exercised their democratic rights.”

On 14 August 2017, the Federal Government again criticized the policy of President Maduro and called for the release of all political prisoners. Referring to the Declaration of Lima, in which 11 Latin American countries and Canada had declared, inter alia, that they condemned the rupture of the democratic order in Venezuela and that they did not recognize the new National Constituent Assembly, or any of its decisions, due to its illegitimacy, the government spokesperson said:

“This is a de facto disempowerment of the democratically elected parliament. There is the illegitimate dismissal of Attorney-General Ms Ortega. These are all measure by which the Maduro Government has shaken democracy and is leading the country further and further away from democracy and the rule of law. For that reason, our demands are quite clear, and they lead, of course, to a peaceful solution to the crisis by diplomatic means. That is what we support.

We want and need a peaceful return to democratic order. There must be an end to indiscriminate arrests and excessive violence against government opponents. The dismissed Attorney-General – the already mentioned Ms Ortega – must receive protection. All political prisoners must be released. This is our demand. This is also the core of the Lima Declaration, in which, as already stated, 11 Latin American States and Canada clearly condemn the rupture of the democratic order, initiated by President Maduro.”

This statement was widely interpreted in the Venezuelan media as Germany adhering to the Lima Declaration.

On 16 August 2017, the German Ambassador to Venezuela was summoned to the Foreign Ministry in Caracas where he was handed a note protesting against “interventionist” comments by the German government spokesperson – a fact widely publicized in the Venezuelan media. 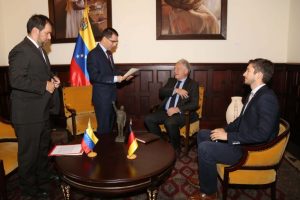 “Venezuela is in a different situation and if there is anything the international community, the European Union or Germany can do, it is to respect the sovereignty of Venezuela and recognize that things have returned to constitutional rule. […] Neither Germany nor any other country in the world has the right to interfere in Venezuela’s domestic affairs. […] With those statements the German Government has committed a violation of the most elementary principles of international law, such as the non-interference in the internal affairs of States, the respect for sovereignty and non-intervention.”

On 19 August 2017, the Venezuelan National Assembly convened a special session and adopted a motion which called “on the international community, to support with appropriate actions, the defence of the sovereignty of the Venezuelan people and the legitimacy of the national parliament”. The session was attended by several foreign diplomats, including the German ambassador, showing their support of the National Assembly.

The German ambassador continued his support of the opposition also in other ways. On 2 September 2017, together with his colleagues from Spain and Italy, he accompanied Venezuelan human rights activist and wife of opposition leader Leopoldo López, Lilian Tintori, to the airport. Ms Tintori wanted to travel to Europe to meet, inter alia, with German Chancellor Angela Merkel to discuss the human rights situation and the latest political developments in Venezuela. As she was subject to a criminal investigation, however, she was barred from leaving the country. Upon arrival at the airport in Caracas her passport was seized by the Venezuelan authorities – an incident “witnessed” by the three diplomats who also attended a press conference that had been arranged by Ms Tintori at the airport.

On 4 September 2017, the German Government spokesperson referred to the incident saying:


“The Chancellor has noted with great regret and with no understanding that the Venezuelan human rights activist Lilian Tintori […] has been prevented from leaving the country. […] The Federal Government condemns this step. It condemns that Ms Tintori was prevented from leaving the country. This is further proof that the Maduro Government is acting arbitrarily. We call on the Venezuelan Government to lift the travel ban on Ms Tintori with immediate effect and to allow her to travel to Europe.”

Again, the reaction of the Venezuelan Government was swift. On the same day, the German ambassador, together with his Italian and Spanish colleagues, was summoned to the Foreign Ministry to each be individually handed a note protesting against the “interference” in the internal affairs of the country. 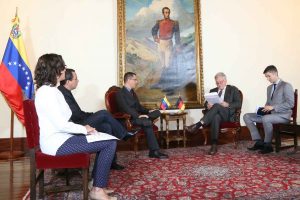 After the meeting with the ambassadors, the Venezuelan Foreign Minister said:

“We handed them an official and decisive protest because of the interferences and their conduct in Venezuela, interfering in the internal affairs of Venezuela, […] in the functioning of its democracy and its public authorities. […].

The ambassadors were used by Mrs Tintori, who had prepared a press conference, accompanied by the ambassadors, knowing that she would not be able to leave Venezuela because of the case in which she is accused.

There is an ongoing investigation and, for that reason, she was barred from leaving the country until she has appeared before the Venezuelan justice system. […]

They claimed that the Venezuelan Government did not let the activist Lilian Tintori leave when we all know the truth: she must appear before the Venezuelan justice system; and such expressions are absolutely impertinent, absolutely offensive towards the functioning of Venezuelan democracy and its institutions.”

Germany, however, did not let the matter rest. On 19 September 2017, during the 36th Session of the United Nations Human Rights Council, the German representative raised the situation in Venezuela during the general debate stating:

“Regarding Venezuela we remain deeply concerned by the dismantling of the democratic order by the Constituent Assembly, the intimidation and threatening of deputies of the Asamblea Nacional and the persecution of political opponents. Arbitrary detentions and systematic use of disproportionate force during demonstrations also give cause for great concern.”

Both the German action and the Venezuelan reaction show that the law on non-interference in the internal affairs of States is in a state of flux. In the past, Germany’s public criticism of the Maduro Government, its taking sides with the opposition, as well as its public demands for the release of government opponents and the lifting of judicially imposed travel bans on opposition figures would have been considered illegal interferences in the internal affairs of a State. Germany and other countries no longer seem to accept this.